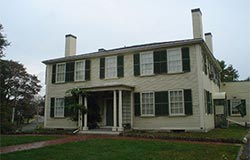 We offer the following in Newton, MA

About Newton, MA - Happy to be your hometown Heating & Air Conditioning Contractor!

Newton, Massachusetts is a Boston suburb of about 85,000 residents which was named by “Money” magazine as the fourth-best small city to live in the U.S. It is actually made up of 13 separate villages: Auburndale, Chestnut Hill, Newton Centre, Newton Corner, Newton Highlands, Newton Lower Falls, Newton Upper Falls, Newtonville, Nonantum, Oak Hill, Thompsonville, Waban and West Newton.

Originally settled in 1630, Newton was incorporated in 1688 and boasts numerous historic sites including the East Parish Burying Ground, which dates from the 1660s, the West Parish Burying Grounds, dedicated in 1781, and the Jackson Homestead, which was built in 1809 and served as a stop on the Underground Railroad. The Jackson Homestead has been home to the Newton History Museum since 1950. Famous Newton residents through the years have included thespians Matt Damon, Jack Lemmon and Bette Davis, authors Isaac Asimov and Nathaniel Hawthorne, playwright David Mamet, poet Sylvia Plath, philosopher Ralph Waldo Emerson and Red Sox star slugger Ted Williams. The Fig Newton cookie was also named for the town, although it was first produced in a bakery in nearby Cambridge.

Newton has the four seasons typical of New England, with winter lows dipping to 17 degrees in January and summer highs averaging 82 degrees in July. The Newton Community Pride organization sponsors special events throughout the year, including French, Chinese and Latin American Cultural Festivals in March, a Russian Cultural Festival in April, a Kids FunFest in May, a July 4 Celebration, Newtonville Village Day in September, a Harvest Fair in October, the Oodles of Noodles Festival and India Cultural Day in November and a Holiday Lighting Ceremony in December.